A major strength of the British car manufacturing industry is its diversity, with a mix of volume, premium and specialist producers. 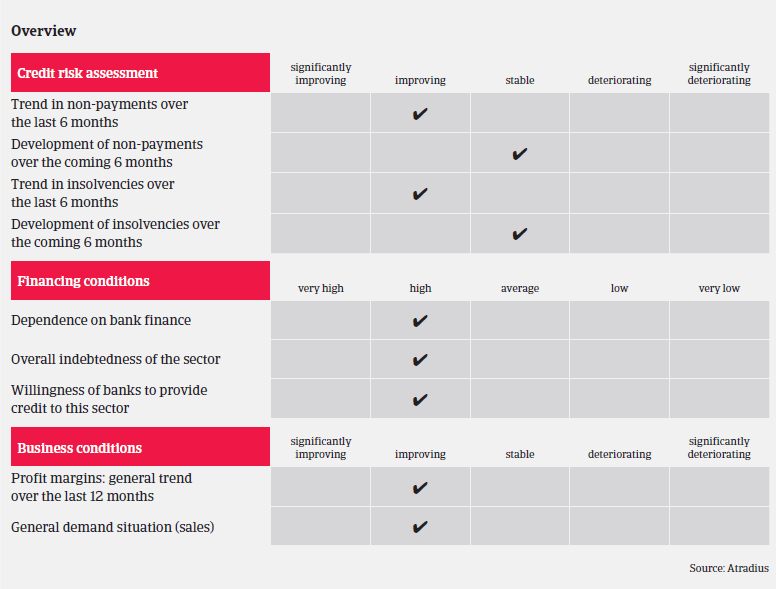 The UK automotive sector has continued growing in 2015, although at a more modest rate than in 2014. According to the Society of Motor Manufacturers and Traders (SMMT), car production increased 0.3% in H1 of 2015, to 793,642 units. In June 2015 output increased 5.4% year-on-year, and production for sales overseas increased 9%. Overall, production volumes have increased by more than 50% since 2009. A major strength of the British car manufacturing industry is its diversity, with a mix of volume, premium and specialist producers. The proportion of premium and specialist cars, in particular, has grown in the past decade, leading to increasing demand from outside the EU.

According to SMMT, new passenger car registrations in the UK increased 7% year-on-year in H1 of 2015, to more than 1.3 million units, after growing 8% in 2014. The UK-built Vauxhall Astra, Nissan Qashqai and Mini were among the overall top 10 sellers in the first half of 2015. The ongoing robust economic performance in the UK, with decreasing unemployment and rising consumer confidence, coupled with low interest rates, attractive finance deals and lower running costs available for newer models, are driving demand. The SMMT expects domestic car sales to increase by more than 8% in 2015. 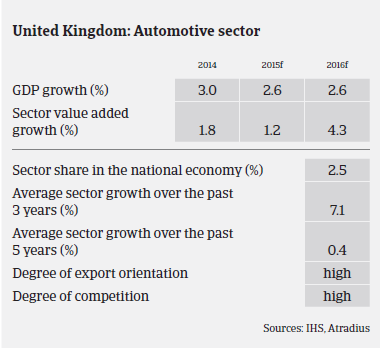 Credit ratios of most automotive suppliers,  and their ability to generate cash have further improved in 2014 and 2015 as a result of their solid profitability, and this has allowed them to reduce debt. However, the sector’s success is still being partially fuelled by discounts and margin-eroding sales tactics, which means that profitability will not necessarily rise in line with shipments. Fleet sales to companies are often heavily discounted. Sales to rental companies are at cost, or lower, and the biggest loss maker involves dealers registering cars as demonstration models only to sell them on to customers, unused, at discounted prices.

A challenge facing the automotive retail sector is the impact of the increasing number of nearly-new used vehicles returning to the market. Used car supply is increasing as the new car market grows, and this potentially could lead to lower margins for used car sales.

Payments in the UK automotive industry take around 60 days on average. Protracted payments in the sector are rare and consequently we have seen no increase in notifications of non-payment over recent months. Compared to other UK industries, the automotive sector’s default and insolvency rate is good, with a stable outlook.

As in 2014, our risk underwriting stance remains positive towards most parts of the UK automotive sector, given the good payment and insolvency performance and reflecting the ongoing robust car demand in the UK and in the Eurozone. 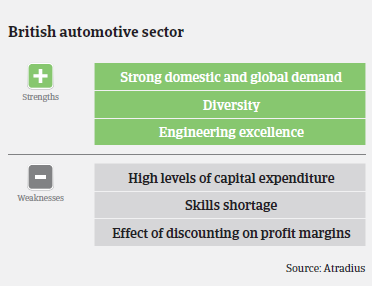 That said, Tier 3 component manufacturers and independent specialist vehicle manufacturers still represent higher risks than other segments. As in 2014, still most of the credit insurance claims we receive relate to the aftermarket and haulage subsector. Characteristically, these are usually small businesses where information is limited to abbreviated accounts and most of these failures have been caused by internal management issues.

The UK economy expanded by 2.6% in 2014, the fastest pace of growth since 2007. While consumer spending was the main driver, real fixed investments also increased.

The UK car market continued to grow last year. Compared to other UK industries, the automotive sector’s default and insolvency rate is good, with a stable outlook.