The Netherlands: the biggest DSO increase in the region

In 2018, the average DSO recorded in the Netherlands is 46 days, an increase of five days compared to 2017. This is the biggest increase in Western Europe.

Of the Western European countries surveyed, the Netherlands had the highest percentage of respondents who said that over the past 12 months, overdue B2B invoices did not have a significant impact on their businesses. However, 43.6% of respondents said that their companies have been affected and they needed to take action. 14.9% of suppliers had to pursue additional financing and 14.4% had to request a bank overdraft. The Netherlands was also the country with the steepest increase in DSO, which climbed from 41 days in 2017 to 46 this year.

Decision to trade on credit based on business relationship 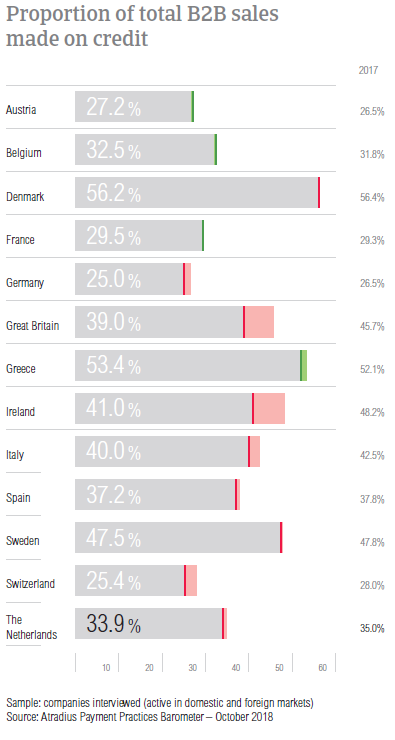 The proportion of total B2B sales made on credit in the Netherlands is stable at 33.9% (35.0% in 2017). Similarly to what was observed in previous years and like most of their peers in Western Europe, Dutch respondents are more inclined to trade on credit domestically than internationally. In 2018, 40.1% of domestic B2B sales and 27.7% of foreign B2B sales were made on credit.

Dutch suppliers said that they use trade credit in domestic B2B sales with customers whom they trust and with whom they have developed a long-term business relationship. Respondents in this country also believe that it is easier to trade on credit than to use other methods. However, if they lack information on the customer’s business or payment performance and if customers proved financially weak, Dutch suppliers would not extend trade credit (20.0% of respondents mentioned each of these reasons for  not extending trade credit to their domestic customers).

We grant trade credit because this way we receive faster payments.

The main reasons for granting credit to B2B customers abroad mirror those on the domestic market: a collaboration developed over time which proved that the customers are creditworthy and the ease of trading on credit. 21.9% of respondents said that they would not sell on credit terms to financially weak customers. The second most frequently mentioned reason for not selling on credit to B2B customers abroad is a lack of information on the customer’s business or payment performance (28.1% of respondents cited this).

Trade credit is only provided to proven paying customers.

A steep increase in DSO

The percentage of Dutch respondents who reported late payments by B2B customers dropped significantly to 87.4% from 92.5% in 2017. This is in line with the regional average. Payment delays occurred more frequently from domestic B2B customers than from B2B customers abroad. 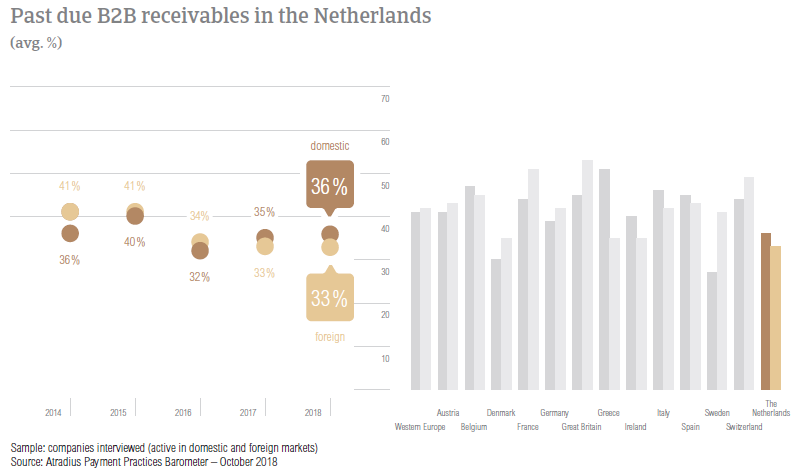 In 2018, the average Days Sales Outstanding (DSO) figure recorded in the Netherlands is 46 days, an increase of five days compared to 2017. This is the biggest increase in Western Europe and bringing  the Netherlands’ average above the regional average. Looking at the coming 12 months, 68.3% of Dutch respondents said that they do not foresee any changes in their company’s DSO. Of those who expect changes, 10.0% anticipate an increase while 21.7% a decrease.

An increase in payment duration 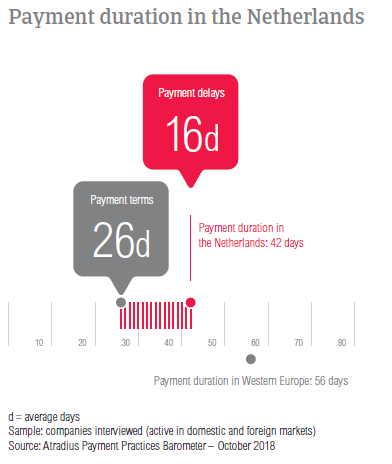 In 2018, suppliers in the Netherlands reported an increase in payment delays by B2B customers abroad. These went up from an average of 12 days in 2017 to 17 days this year. There were no changes in terms of domestic payment delays (on average 15 days).

The changes in payment terms and small increase in payment delays resulted in a four day increase in the average payment duration, which now stands at 42 days. Despite this deterioration, Dutch suppliers, next to their peers in Germany, manage to convert B2B invoices into cash the fastest in the region.

Domestic payment delays in the Netherlands occurred mainly because of insufficient availability of funds (mentioned by 34.6% of respondents) and the complexity of the payment procedure (30.9%). Significantly fewer respondents stated insufficient availability of funds compared to one year ago when 52.8% of respondents stated this. The percentage recorded in the Netherlands is also far below the regional average of 47.3%. In contrast, the percentage of respondents citing complexity of the payment procedure increased significantly compared to 2017 when it stood at 18.9%. 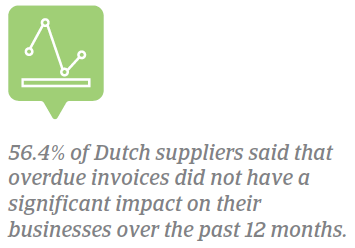 43.6% of suppliers in the Netherlands mentioned that their companies have been affected by overdue B2B invoices in the last 12 months. While this is the lowest average percentage of the Western European countries surveyed, 14.9% of those impacted reported that they needed to pursue additional financing and 14.4% that they needed to request a bank overdraft extension. 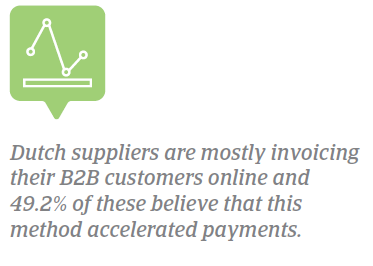 The majority of respondents in the Netherlands (65.5%) said that they are using online invoicing with their domestic and foreign B2B customers. Another 9.4% want to make the move towards the online environment this year. In contrast, 23.2% said that they do not use e-invoicing and only 2.0% that they are no longer use it.

49.2% of Dutch respondents believe that electronic invoices accelerated payments. In contrast, a low 10.9% experienced slowdowns in payment and 39.8% did not notice a noteworthy effect on payment duration.

Bankruptcy mentioned less often as a top reason for write-offs 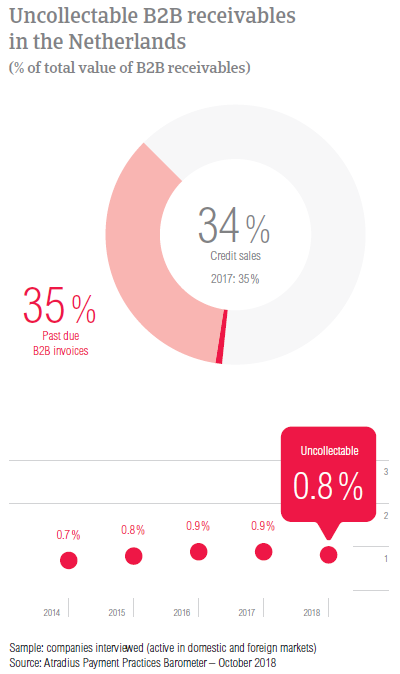 In 2018, the average proportion of uncollectable receivables in the Netherlands remained stable at 0.8% (0.9% in 2017). Similarly to what was observed in the past, mostly domestic B2B receivables were  written off as uncollectable.

Uncollectable receivables originated most often from B2B customers in the construction, electronics, consumer durables business services and services industries. B2B receivables were reported to be uncollectable mainly because of the customer going bankrupt or out of business. While 52.8% of respondents stated this, there was a significant reduction compared to 2017 when bankruptcy was the main reason for uncollectables for 60.4% of respondents. Secondary reasons were the high costs to pursue the debtors (mentioned by 25.8%) and the inability to locate the customer (24.7% of respondents).

Consumer durables – a problematic sector in 2018 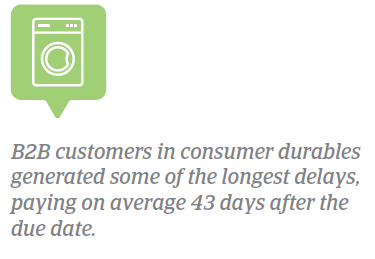 Despite the longer payment terms offered, B2B customers in the consumer durables sector paid on average, 43 days after the due date, generating some of the longest delays. The top reasons for payment delays in this sector were insufficient availability of funds and buyers using outstanding invoices as a form of financing (each of these reasons reported by 34.0% of respondents).

Looking at the coming 12 months, 67.0% of suppliers in the Netherlands do not expect changes in the payment behaviour of their B2B customers in consumer durables. Of those who foresee changes, 14.0% expect deterioration and 18.0% improvement.

The global economy is in an upswing based on broad-based economic growth and still-low interest rates, but we are reaching a turning point.

While Dutch ICT distributors are becoming larger, many smaller companies are changing their business model to have a more service-oriented approach.

A potential downside risk would be another deterioration in house prices, given high levels of mortgage debt and banks’ exposure to the housing market.